Periodontal disease (also called periodontitis and gum disease) has been linked to respiratory disease through recent research studies. Researchers have concluded that periodontal disease can worsen conditions such as chronic obstructive pulmonary disease (COPD) and may actually play a causal role in the contraction of pneumonia, bronchitis and emphysema.

Periodontal disease is a progressive condition which generally begins with a bacterial infection. The bacteria found in plaque begin to colonize in gingival tissue, causing an inflammatory response in which the body destroys both gum and bone tissue. The sufferer may notice the teeth “lengthening” as the gums recede while the disease progresses. If left untreated, erosion of the bone tissue brings about a less stable base for the teeth, meaning loose, shifting or complete tooth loss.

There are a number of different respiratory diseases linked to periodontal disease. Pneumonia, COPD, and bronchitis are among the most common. Generally, bacterial respiratory infections occur due to the inhalation of fine droplets from the mouth into the lungs. COPD is a leading cause of death and should be taken very seriously. 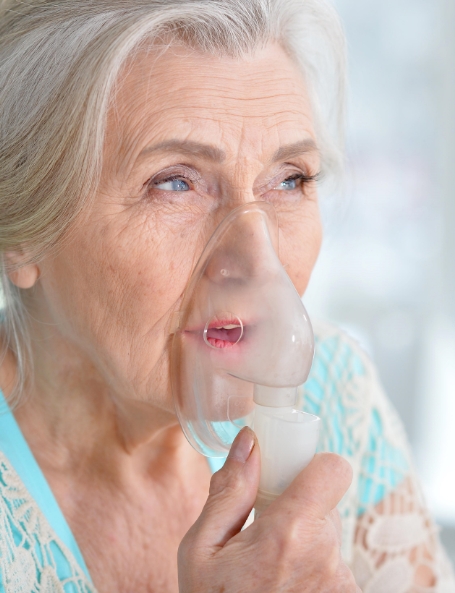 Reasons for the Connection

The fact that respiratory disease and periodontal disease are linked may seem far-fetched, but there is plenty of evidence to support it.

Here are some of the reasons for the link between periodontal disease and respiratory disease:

The specific type of oral bacterium that causes periodontal disease can easily be drawn into the lower respiratory tract. Once the bacteria colonize in the lungs, it can cause pneumonia and exacerbate serious conditions such as COPD.

It has been well-documented that most people who experience chronic or persistent respiratory problems suffer from low immunity. This low immunity allows oral bacteria to embed itself above and below the gum line without being challenged by the body’s immune system. Not only does this accelerate the progression of periodontal disease, it also puts the sufferer at increased risk of developing emphysema, pneumonia and COPD.

Smoking is thought to be the leading cause of COPD and other chronic respiratory conditions. Tobacco use also damages the gingiva and compromises the good health of the oral cavity in its entirety. Tobacco use slows the healing process, causes gum pockets to grow deeper and also accelerates attachment loss. Smoking is not the sole cause of periodontal disease, but it is certainly a cofactor to avoid.

Periodontal disease causes the inflammation and irritation of oral tissue. It is possible that the oral bacteria causing the irritation could contribute to inflammation of the lung lining, thus limiting the amount of air that can freely pass to and from the lungs.

When respiratory disease and periodontal disease are both diagnosed in one individual, it is important for the dentist and doctor to function as a team to control both conditions. There are many non-surgical and surgical options available, depending on the specific condition of the teeth, gums and jaw.

The dentist is able to conduct deep cleaning treatments such as scaling and root planing to remove hardened calculus (tartar) deposits from the gum pockets. An antibiotic may be prescribed to ensure that the bacterium is completely destroyed and the periodontal infection does not spread. In most cases, periodontal disease can be prevented with regular cleanings and proper home care.

Whichever treatment is deemed the most suitable, the benefits of controlling periodontal disease are two-fold. Firstly, any discomfort in the oral region will be reduced and the gums will be much healthier. Secondly, the frequent, unpleasant respiratory infections associated with COPD and other common respiratory problems will reduce in number.

Call or Text Us